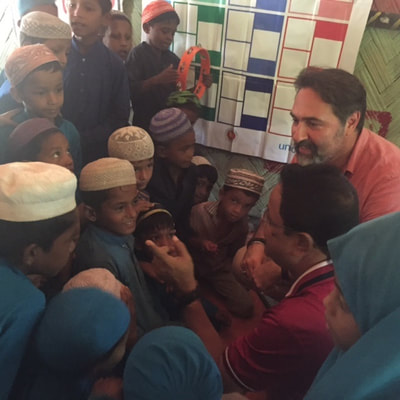 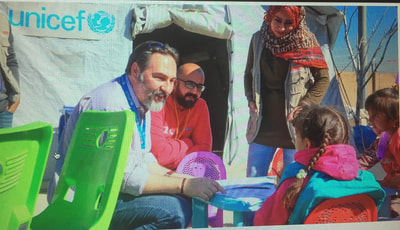 ​Mark is the Chief Operating Officer for UNICEF UK the leading child rights and international development charity.
He is responsible for making sure that UNICEF UK runs well and they achieve their aims and objectives. Mark is also a Chair of trustees with 1st Place, a South London children’s centre charity and is a trustee of the Royal College of Paediatrics and Child Health. He recently visited refugee children in camps in Iraq and Bangladesh.

UNICEF UK’s overall vision is to create a world fit for every child, within which their 3 main aims are to: Give children a voice, Unlock resources for children and Advocate and create change for children across the world.

As a child rights charity UNICEF are particularly concerned about the status of refugee children with respect to different parts of their life becoming so uncertain and vulnerable. For example, having a safe home, good nutrition and health, becoming separated from their families in many instances and education.

1.How do UNICEF help refugees and internally displaced children and what is the outcome of your work?

In refugee camps we take responsibility for ensuring children are safe. We create child friendly spaces. It’s a really a safe place within a formal or informal refugee camp where children can come and play and be looked after. We often have child protection officers associated with that. It’s a place where children can begin to get back to some sort of normality, they can play with other children and if they have any emotional needs we can assist with that. Protection and education are important aspects of what we do.
In an emergency setting where a camp has been formed we also have responsibility to provide clean water and sanitation for children. You might wonder why clean water and sanitation are part of what we do, but it is key because children can become ill very quickly and die from water born diseases. UNICEF is also a big provider of vaccinations and therapeutic food, which helps children regain their nutrition quickly. Once a camp is established we also help set up schools. Our efforts focus on different parts of our work depending on how recent or emerging the refugee situation is.

2.What do you think is the biggest impact UNICEF is having on the ground to change the life of people affected by the refugee crisis?

I think the biggest thing is probably the protection and education agenda.  Creating the safe spaces for children but also leading that effort through to education of children. Definitely the biggest impact is made on that front in the Middle East, in Syria and Iraq.  But if you take a situation which is unfolding in front of our eyes like the crisis in Rohingya then it’s the more immediate support we provide like water and food and protecting children and registering them when they are unaccompanied. We are also trying to change laws where currently unaccompanied children in a new country are not allowed to be reunited with family who are not their immediate family, so a child could not be reunited with an uncle for example. We are campaigning under a campaign called Stand with Refugee Children to have this law modified so that children can be reunited with family other than parents.

3.What are the challenges other than funding, face UNICEF to help refugee children?

Often the cause of the crisis is conflict, sometimes it can be difficult to access the actual area where people are fleeing from.  So it’s hard to get supplies and resources into that area to help children who are trapped there and want to be refugees but cannot get out.  Having adequate resources and logistics in conflict zones to do what we would like to can also be a challenge for us.
The perception of refugees in Europe also becomes a problem for us as people don’t always welcome refugees into their countries, so we see situations sometimes where refugees and children are not made welcome either in the communities they are travelling through or in the communities they are settling into.
​4.Do you think the media is covering enough of the refugee crisis and their journies?  If not what needs to be done and how will it actually help the crisis?

I don’t think we are covering it enough and we also tend to see the very acute phase of the crisis where you see pictures of people leaving in large groups or tragedy at sea but there is not emphasis on what happens to people either when they get to refugee camps or them settling into communities. The media approach is very sensationalist and I do understand that’s it's because sometimes it is very dramatic and often related to an emergency situation.
However, there is not enough follow through on the lives of refugees to show how difficult or not there lives are.  I would like more coverage of that.
​5.Do you feel there is any light at the end of the tunnel for refugees?

We do this work because we can make a difference and we believe we can help and that we are helping. So yes I do feel there is light. There are so many refugees who have resettled and gone on to work and be educated. In Europe we believe that so many refugees have come to Europe but that’s not actually true so many are still living in their surrounding areas within their own country where there is conflict and violence in camps.  Those camps are well organised, in some we have schools, there are start up businesses in the camp.  Its not ideal and not like living in a normal town but I think there are opportunities for people to live their lives and so think there is light but still needs an awful lot of work and there is lots more to do.  At the moment there are still refugees living in very desperate situations around the world and we are not getting to all of those.
The crisis tends to focus on big movements of people like in Syria or Bangladesh but all over the world there are smaller movements of people who are displaced because of conflicts which are just not as high profile or due to climate change. As a result of which they are  on the move and we don’t hear about them and I worry there are many who are caught up and we are not aware of them either.

6.There are many organisations who help refugees, is there a way you can collaborate together which would make an even bigger impact?

​The good news is we do collaborate.  We work very closely with the UNHCR United Nations High Commission for Refugees) and the IOM (International Organisation for Migration).  There is very good integration on the front line and we make sure we are not doing the same things. In relation to the UN agencies there is very careful co-ordination.

This interview was conducted over the phone