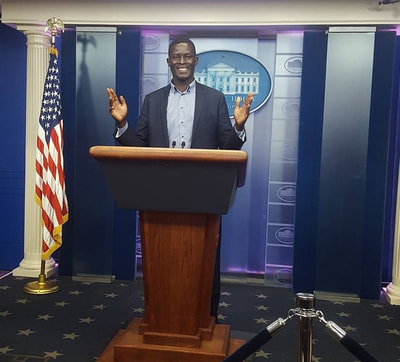 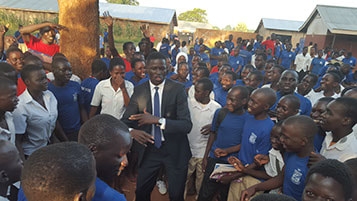 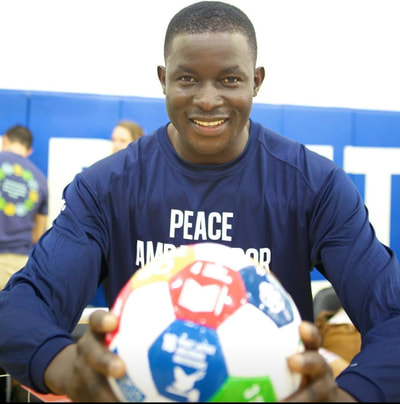 ​Victor Ochen was born and raised in Abia one of Northern Uganda’s camps for internally displaced people. He has lived through 21 out of 33 years of war. His brother and cousin were kidnapped and never returned, resulting in his desire to help others. He has lived through poverty, which at times meant he lived on one meal a day and had no clothes to wear. His parents brought him up to believe in peace rather than violence despite his environment. He worked so that he could study, as education was important to him.

As a peace-activist Victor works with young people who have been part of the war and conflict in Uganda as the founder of the African Youth Initiative Network (AYINET), which works to rehabilitate victims of war by providing psychosocial support and healthcare.
In 2015 he was the youngest African Nobel Peace Prize nominee and appointed the UN Ambassador for Peace and Justice. In 2016 he was appointed as the Global advisor to the United Nations High Commissioner for Refugees, on Gender, Forced Displacement and Protection.

1.What do you remember the most about your time as an Internally Displaced Person?

I remember the daily struggle to survive, not only to survive abduction but also to survive missing food.  There were moments where I was more worried about whether I was going to eat than if I was going to be killed.  It was a childhood defined by survival. If you survived being abducted, next you had to survive starvation, next you had to survive loosing a family member and you were afraid of your security and safety, and where to sleep.  You had to also worry whether the next foot you will place as you walk is not on a landmine. This was the life.  Sometimes you would walk with people and a landmine blows up people around you.   It was a life of hardship, pain, fear and daily struggles to survive.


2.What gave you the courage to keep going, while life was so tough, surviving on 1 meal a day and sometimes no clothes?

I used to think whether people around the world were living the same life as me and the truth was they were not. I went through thoughts of despair and fear and was afraid to think I would not see tomorrow or I will not be able to survive another day. But, I reached a point where I was sick and tired of my own suffering. It was not a unique feeling everyone around me felt like this but what made the difference between my feeling and theirs was the decision I took, which was how to make a difference? Although I was in pain I constantly thought about how could I choose to live a different life, others around me choose to fight the pain by picking up guns but I choose to speak for peace and that was the only way I could never become a source of pain and move forward.

3.How did you keep enthusiastic during the war?

It was a very difficult to expect something good to come out of a very difficult and harsh type of life I was living but I think even though we lost everything I had hope and faith in the future. I knew that no situation is permanent, and it would be over one day.
I had faith in the future and myself and I knew what I was doing was right. I knew my choice to stand up for what is not popular which was peace was right, but others thought this was weakness given what was happening around us. I wanted to build a platform for peace. By building a platform for peace I wanted to live side by side of the reality that was around me and did not want to join the violence, as this was not right.  Doing that would just spread more hurt.


4.What would you recommend to refugees to keep them going, to keep them believing that their home is one day going to be rebuilt and one day they can go back?

Its difficult to give a message of hope to someone who is living a hopeless life especially refugees.  It makes no sense to tell them to be calm and they will go back home. Simply because, even if the war stopped and people went back, their life will never be the same. They have lost everything. The only thing that is not lost is their painful stories. That will remain with them.
The best thing to do is give assurance of justice to those that have suffered. People want accountability. The violators of human rights should face justice. This is what will heal and change people. Until our messages for the future are built on strong pillars of justice and accountability we will have the repetition of everything we are seeing now. Justice should not be just mere talk. It should be a reality.  You cannot say prosecuting the criminals will bring healing to the people.
People need to be supported and live a life of dignity. Justice cannot wait. It has to start by ensuring people that whatever they need to live a life of dignity will be made available. Whether its safety, food or shelter, why should it be defined by the suffering as refugees.
They should be defined as humans who are going through misfortunes. If you label them as refugees this means they are not entitled and they are foreigners and we are doing them a favour to live in our country.  We start to look at them as “them” and not as “us”. This creates a wall. They must be given opportunities to pursue the benefits that come with life. What to eat, where to sleep, where to stay where to educate their children. We do not need to wait until the war is over and justice is delivered.


5.What is one of your greatest achievements in relation to AYINET?

We have brought on many people as partners and I have spoken at many platforms. These are all achievements but the most important achievement is to help the people whose limbs were cut off, those who were emotionally scared, children who were sexually abused, we have treated them to heal.
We have treated and saved over 15,000 lives that is what we do and what makes me happy. I am super grateful because I have seen a lot, the best and the worst in life but what makes me happy is to think about what  I have given in my lifetime to help someone live a better life. This is more important to me.


6.How difficult is it to help victims of war who have suffered from emotional trauma?

War these days is very commercialized and it is very lucrative so those fighting focus on that, but the war victims are left on their own.  Everyone wants to take something from the war victim. They need more resources, in terms of support and real recovery. It is difficult because people who come to help them are not accountable and make them feel people they are doing them a favour. There is a lot of conflict of interests in response between organisations and government, and this affects war victims.


7.What do you think needs to be done for the accountability and justice that the war victims are looking for?

The best accountability is not even financial, it is making sure that the people who are responsible for the suffering are prosecuted to at least triple the amount of suffering they have caused. The process of accountability should also discourage future perpetrators of violence. Lets make humanitarian response more human. There are so many refugees who are doing great work to support fellow refugees but no one knows about them. The victims voice should be given importance and an opportunity to decide in the process that determines their fate.
Media will give opportunity to amplify the voice of refugees but also media these days has their own agenda. Unfortunately media has become a platform for exhibiting the painful episodes of people. They don’t exhibit the stronger side of society. They do not portray the power of resilience. They need to report in the interest of the sufferers.


8.Do you think it is possible to fully recover from post-war trauma?

Recovery is a process. There are so many elements. Rehabilitation of both physical and emotional healing is key.  The second part is infrastructure and development. You have to help people regain what they have lost, and the last part of recovery is reassuring the people who have suffered that it will not happen again. Recovery can never be full. But if the healing process is done correctly then it can open up a process for them to look at a difficult situation more positively.


9.What are your future plans, as an UN Ambassador and founder of AYINET?

I want to do more to engage politicians at all levels.  We are looking for dialogue between all generations and need finance. Africa suffers today but we have suffered for years. I want to help people and make Africa a liveable continent, where people will not die trying to escape at sea as they have to flee from Africa. We have so much here, we have resources, its green and beautiful so I want those that want to stay here to be able to do that. I want to mobilize a new age that stands for peace and as we deal with terrorism we at the same time do not create more terror.


10.What would you call upon Western governments to do to help?

Its very simple, I would call upon them to change their hearts. The West have the resources to create solutions but they also have the means to create more suffering. You cant have compassion and destruction together, so we need them to use their hearts and use resources in a way that it shows they care for people not in a way which shows that life in Africa is worth less than anywhere else.​​


11.As a peace activist, in today’s world what do you think refugees around the world are most in need of?

They are most in need of respect. They want to be treated as human. If actions are done without respect it hurts people. It hurts me to see policy makers make policies that give authority to bomb people in other places. That’s not ok, what did they do to deserve that? You can’t have a global prescription of how people should lead their own life. People should be allowed to have a say. If refugees feel respected they will respect themselves and other people too. Second thing is to build relationships. We have to know they are human beings and we cannot treat them as worthless, they are going through difficult times. Dignity is key. We can keep destroying or we can create a new fort and work together. We should learn from the suffering and make sure it is not created again. People ​do not always want food, they want voice.  ​​

This interview was conducted over Skype